HOW TO REMOVE RUST FROM YOUR CAST IRON SKILLET

I questioned so often why would anyone make cookware that rusts in a few days? I never knew anything about a cast-iron skillet. All I knew was that they are thick and make cooking easy.

WHY YOU NEED TO SEASON A SKILLET 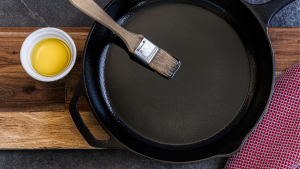 TYPES OF OIL FOR SEASONING A SKILLET

Carbonized oil is just one of the oils that can be used to seasoned a cast-iron skillet, but Olive oil is a simple cost-effective way to seasoned a skillet. Everyone has a bottle of olive oil laying around somewhere.

AVOID DOING AND USING THESE THINGS

Your skillet should and must never be washed in a dishwasher, NOPE not your skillet, that’s way too much water fora skillet. The problem with how we care for our skillets is how we dry them.

Caring for a skillet just take a little time and effort. The number one goal is to always keep your cast iron skillet seasoned and dry. This type of pot requires more attention than your other pots.

THE PROPER WAY TO CLEAN A CAST IRON SKILLET

As much as it may seem like cast skillet is impossible to clean this is the opposite. If you have an abrasive scrubbing tool, a strong dish soap’ and baking soda is what we’ll be using. A side of potato with a dab of salt is another genius way to clean a skillet.

Vinegar comes highly recommended as a natural cleaner, Yes, it is acidic but because it is made from food substances that can be used as a cleaner, dish soap and baking soda will also be needed to remove the rust. However, You can use a potato to scrub the skillet also. That’ll show you as we go along.

USING A POTATO TO SCRUB A SKILLET

Most foods we eat daily are highly acidic potato is high on that list. If your main focus is cleaning naturally. Then using a potato with salt to scrub away rust from your skillet is what you should be doing. When washing a skillet is not to overdo it on the products used to wash it.

Focus on washing your skillet the natural way at all time. Doing so will keep your skillet rust-free kicking for your years. Never soak your skillet overnight. Soaking iron will only contribute to rust.

instead of keeping it in the cupboard. Hang the skill or place it where it has enough air. This will keep it dry at all times. Remove the lid from the skillet until its completely dry.

ANOTHER WAY TO SEASON YOUR SKILLET

Did we look at carbonized oil? This is another way to season your skillet and can be purchase at your local supermarket. As before mentioned. I like to keep a little cooking oil in my skillet that works incredibly well.

Well, that’s all folks, and that’s just my way of seasoning a cast iron skillet and preventing rust at the same time. Using olive oil and cooking spray will do a wonderful job and helps with beautifying your skillet too.

TO SUM IT UP

Now you know how to clean and season your skillet, hmm 2 in 1 the extra was just for you. Show your skillet how much you care with these tips.  Remember these steps, wash naturally, dry well and seasoned with love. Thanks for stopping by see you soon.